How To Recognize A Fake News Story 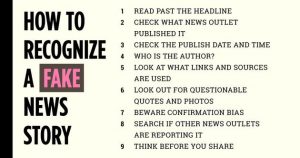 If you’ve been looking at Facebook lately, you may have seen that Pope Francis endorsed Donald Trump, a town in Texas was quarantined due to a deadly disease and Germany just approved child marriage. To be clear, none of these events really happened ― but that didn’t stop news of them from spreading like a virus.

Fake news articles ― especially throughout this election year ― have increasingly become a fixture on social media. These posts, designed to deceive, run rampant across the internet. Only later, if ever, do readers discover that the stories they shared may have been false.

The publication of blatantly inaccurate stories is certainly not new to the digital age, or even the analog era ― just check your local supermarket aisle for tabloids ― but what is new is how easy it is for a reader to scan a headline on Facebook, hit share and watch his 500 followers do the same.

As it stands, there are few checks and balances to prevent any outlet from posting an article that is made up of false facts. In the coming months social media platforms will need to address many broader questions, including what level of editorial control sites like Facebook should exercise over the content on their platforms.

After initially downplaying the problem, Facebook announced on Friday that it would begin seeking out ways to weed out some kinds of fake news from feeds. Google, too, said it plans to stop fake news sites from using its ad-selling service.

But part of stopping the spread of hoaxes and misinformation also falls on readers who email these articles to friends and family or post them on social media, lending these stories their own credibility.

In order to prevent the spread of fake news, here is a quick guide to spotting it.

1. Read Past The Headline

One way that fake news gets amplified is that busy readers may not look past the headline or opening paragraph before they decide to share an article. Fake news publishers sometimes exploit this tendency, writing the beginning of a story in a straightforward way before filling in the rest with obviously false information.

In other cases, clicking through to the article will reveal that the story really has nothing to do with the headline at all or provides nothing to back it up.

2. Check What News Outlet Published It

Unfamiliar websites plastered with ads and all-caps headlines should draw immediate skepticism. Googling a site’s name and checking out other articles it posts should also help determine whether it’s trustworthy.

Many fake news sites will outright say that they are satire or don’t contain factual information, but others are made to mimic major news outlets. Check the URL names of pages that look suspect, making sure that it’s not a hoax site that is pretending to be a trusted source.

3. Check The Publish Date And Time

Another common element in fake news is that old articles or events can resurface and lead people to believe they just happened. Checking the publish time stamp is something readers can quickly do to prevent being misled.

Sometimes, however, finding out when an event happened can take a bit more work ― such as when the date of an article is current, but the events described within it are old. Click through links and read carefully to determine when the event described actually happened.

Looking at who wrote the article can reveal a lot of information about the news source. Searching through the author’s previous articles can show whether they are a legitimate journalist or have a history of hoaxes.

5. Look At What Links And Sources Are Used

A lack of links or sources for claims in an article is an obvious warning sign that the post is likely false. Fake sites may also provide numerous links to sites that appear to back up their claims, but are themselves spreading misinformation. Check to see that claims supported by links actually come from reliable sources.

6. Look Out For Questionable Quotes And Photos

It’s incredibly easy for fake news writers to invent false quotes, even attributing them to major public figures. Be skeptical of shocking or suspicious quotes, and search to see if they have been reported elsewhere.

Likewise, it’s easy to take a photo from one event and say it’s from another. Images can also be altered for a certain story. Reverse image searches, either through Google or tools like TinEye, can help you find where an image originated.

People are often drawn to stories that reinforce the way they see the world and how they feel about certain issues. Fake news is no exception, and many of the articles that fall under its umbrella are designed to stir up emotion in readers and prey on their biases.

It’s important to check that news stories are based in fact, rather than sharing them because they support one side of an argument or bolster pre-existing political beliefs.

8. Search If Other News Outlets Are Reporting It

Fake news sites rely on readers to share and engage with their articles in order for them to spread. In extreme cases, these fake articles can balloon out of control and have unintended consequences for those involved in the stories.

After fake news stories claimed that Hillary Clinton was sexually abusing children at a Washington, D.C., pizza restaurant, the business owner and his employees received death threats and vicious online harassment. The staff is still under attack even though these false claims have been debunked.